TO REACH THE UNREACHABLE 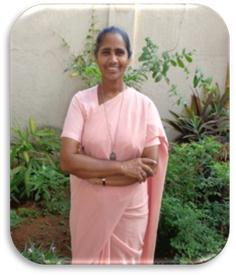 These words of Jesus inspired me to take up the ministry in collaboration with “Prison Ministry of India” (PMI). It is worth to render our service to save the rejected and condemned young women of our society. I feel that this is a special call and more meaningful to render my service to the prisoners who live behind bars. The society, kith and kin are not willing to look at the prisoners with new eyes and the prisoners are also not in a position to face the challenges of the society even though they have a genuine desire to lead a better life.

Keeping in our mind the Cooperate Commitment on building Communion, we render our service in the form of visit in Vigilance Home in Chennai where the victims of the Immoral Traffic Prevention (ITP) act from different states are kept. They speak different dialects, because most of them are from Northern part of India. They have been trafficked and sold by the mediators for prostitution. Some of them are commercial sex workers. Most of the sex workers come from very poor families. The girls come out of their homes at a young age to get some job and to enhance the economic status of the family. They are cheated by the mediators and ultimately pushed to become sex workers. The poverty is the main cause for women to go out and earn for their livelihood. If the girls are arrested by the police, there is none to rescue them from prison and that is the end of their life. Due to this mental and psychological depression they lose the hope of their future.

My visit helps these young women to identify their family and to inform them about the situation to the members of the family. I feel the compassionate love towards the individuals which helps to recover and to see some rays of hope in the future. I come in touch with the minds and hearts of the individuals who are unwanted, rejected and who have lost their image in the society.

I met many Catholic, Hindu young girls who lost their faith in God. The close relationship with them brings them back to God by realizing the love of God and realize that He is ever closer to them and He never leaves them. Prayer, Confession and Holy Mass help the inmates in the Vigilance Home to understand the holiness and Godliness within.

Last month a group of young girls were arrested in Chennai in commercial sex trade. A poor girl named Sathya, 23 year old, got married at the age of 12. After few years the husband left her and settled himself with his mother. With little hope she went in search of a job but unfortunately she became a sex worker. When she narrated the true story to the police hoping to be released, instead she was thoroughly beaten up by the inmates in prison. When she was admitted in the hospital she was found with AIDS. Seeing the situation the police released her and sent her back to her native home. After a week I went to see her in the village with other PMI volunteers. We saw her in a very small shed with her one year old child. She was struggling for life. We prayed and came back; on the next day I received a call from the village president that Sathya was no more. After a couple of weeks we went to see the little child, I was moved to see the one year old child without a mother. Later we came to know that the child also affected by HIV, now I am taking effort to place the child in the AIDS home.

Utter poverty and ignorance lead the women to become sex workers. It is here we need to be sensitive and reach the unreachable, suffering humanity in our places and respond with courage and inner strength.

“Do not follow where the path may lead, go instead where there is no path and leave a trail.”

I am really happy to work with this neglected group of women in the society. I appreciate our Delegation for taking up prison ministry as primary concern to take part in the struggles of Unknown people behind Bars.