I write to inform you that yesterday in Pau, (France) our dear Sister Marie-Paule CHAUVIN entered eternal life. Many of us knew her personally, but for those who did not, Sister Thérèse Segretain (Provincial of the France-Belgium Network) shares the following details: 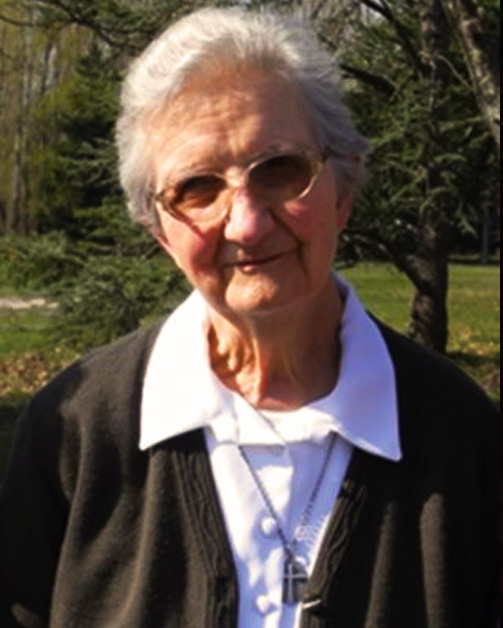 "Marie-Paule CHAUVIN was very familiar with General House life.    From her First to her Final Profession, she was a member of the secretariat of the Immaculate Conception in Talence (Bordeaux).

After a  stay of three years at "Regina Mundi" in ROME, where she wrote her thesis,  she was back again in Talence, this time to work with the “Probanists", in charge of the “3rd year”  (formation for Temporary Professed)  before being elected to the General Council, and appointed Vicar General, during the time that Vatican II was  in progress.

Elected Superior General in 1969, after the turmoil of May 1968 in France , she left Talence once again, when the whole Generalate moved to Rome!

During her two mandates, she contributed to renewing the organisation of the Family by deepening one of the fundamental elements of the charism:  the Association.

It was during that time that the Holy Family Congress was established,  bringing the Family together every ten years and strengthening our belonging.

As part of the missionary impulse which emerged in the context of Vatican II, new foundations, communities of presence close to the people, were opened throughout the world. In the same way another mode of presence also developed in Europe and in the older Provinces: communities gradually left the institutions: nursing-homes, big private schools, to be inserted in the suburbs or in more underprivileged areas.

On her return to France, after her time in office, Marie-Paule put her skills to work in the service of Bordeaux, her native Diocese. She was a key figure in the Diocesan Synod, in the Secretariat for Religious Life and supported the student parish of the university.

Numerous links were forged and afterwards maintained with a few priests;  later, when her strength began to diminish,  Marie Paule asked to join the EHPAD (retirement home) in  Pau,  close to her family.

Always faithful to the Good Father, she reflected deeply on the Charism in the light of the texts of the Word of God chosen for us by the Founder.  She shared her insights with us through a few booklets, the last of which was: "Your Word is a Lamp for my Feet, a Light on my Path” (April 2008).

In this time of Christ the King, we can appropriate for ourselves this passage from the booklet she wrote on the Word of God:

“The Good Father asks us to strive to establish in ourselves the Kingdom of Jesus Christ by contemplating the Holy Family.  This means that we realise that the Kingdom is in our midst… a Kingdom to be welcomed and built up…

“The Son of God came on earth to form the Holy Family”… "The Church is called to continue the life of the Holy Family so that humanity may become the family of God".

Having given her life to Mission in the Holy Family, she now enjoys the presence of her Lord. She loved the Word of God so much!  Now she has come face to face with Jesus, the Word of God.

We join in mourning and celebrating her life.

May she rest in God’s love!