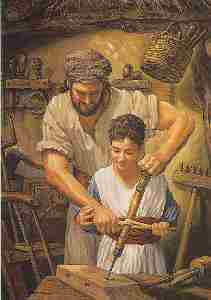 It was a normal, dull Winter’s evening.  I hadn’t much to do so I lay down on the sofa to rest for a quarter of an hour.  After a few minutes I fell asleep and found myself in a carpenter’s workroom. Was it really a dream?  Things seemed strange.  My clothes were not the ones I usually wear.  I was dressed like a citizen of Palestine 2000 years ago.

Suddenly, a person that I recognised appeared – St. Joseph, husband of the Blessed Virgin Mary.  I couldn’t understand what was happening to me. He put down his tools, came over to me and began to speak to me in confidence about what had happened when he realised that Mary was expecting a baby that wasn’t his.   He didn’t doubt her but he was very confused. At that moment, I could see his limitations, his humanness, the tremendous effort that he had to make in order to understand such a great mystery. I must say, these limitations made me feel very close to him, to his way of behaving and thinking.

It was at that time that an angel appeared to him and told him that he must adopt the Son of God. He, a humble carpenter, had to look after the salvation of the world while living a simple, ordinary life.

He also told me that he felt very close to me, in my worries about not being able to pay taxes and maintain my home, in the difficulty of my work, in family relationships and many other things. Then he looked into my eyes and told me to hand over all my problems to Mary and to place everything in the Father’s hands.

In a very reassuring voice, he advised me to live joyfully always and to think about all the sufferings of Nazareth because they were a poor family and had learned to be happy with little, finding their wealth in doing the Father’s will.

When I woke up I saw clearly the exhortation which the Founder gave me when I became a member of the Holy Family of Bordeaux and placed myself in the hands of Jesus, Mary and Joseph, “Feel the strength of bring a Family, of union in prayer and work, of spreading the faith through example…”

I am very happy now when someone says to me, “Be like St. Joseph…” It used to worry me. For the past twenty years I have been trying to be like him and to practise the virtues of which he gave an example in a very humble way.  My hope is that Divine light will always guide my feet towards what is essential, towards simplicity and humility so that I may always serve my sisters and brothers who are in need.

A Lay Associate of the Holy Family  of Bordeaux – Italy