Challenged by the Situation. 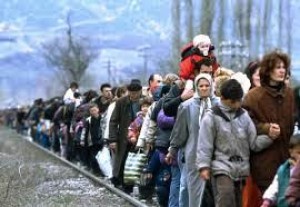 We have just celebrated a day for refugees but do celebrations like that really make us reflect or do we just hear it said, “Today is World Day for Refugees”?   The facts below give some idea of the real situation:

Over twelve years ago, the General Assembly of the United Nations set up “The World Day for Refugees” with the aim of sensitising public opinion  and inviting the public to reflect on the millions upon millions of refugees and asylum seekers who are forced to flee from war and violence, leaving their loved ones, their homes and everything that has formed part of their lives for many years.

This year’s campaign whose slogan is “A Story behind every Number” invites us to reflect on the fact that, behind  each one, there is a story that deserves to be listened to – a story of suffering and humiliation, but also of courage, the will to survive and the hope of once again being able to build their own future…

“Around the world, conflict has forced a record number of people to flee their homes.  More than 50 million people are currently displaced by war and violence, some 33.3 million in their own country and some 16.7 million as refugees, mostly in neighboring countries.  Last year alone, more than 10 million people were newly displaced; every 15 minutes, one family was forced into flight.

Most of the world’s refugees – 86 per cent -- live in the developing world, compared to 70 per cent 10 years ago. Most of these countries have kept their doors open to people in search of safety, and have shown a generosity that is often well beyond their means. I appeal to all Member States and our partners in civil society to do their utmost to support the nations and communities that have welcomed the forcibly displaced into their midst…”

These rising numbers are a stark reminder of the international community’s inability to overcome its divisions to prevent and end conflicts. The Office of the UN High Commissioner for Refugees and its partners continue to provide lifesaving assistance: water and sanitation, food and shelter, education and protection services. But a humanitarian response alone is not enough. Political solutions are urgently needed.

Every minute eight people leave everything behind to escape war, persecution or terror. There are several types of forcibly displaced persons.

Refugees : A refugee is someone who fled his or her home and country owing to “a well-founded fear of persecution because of his/her race, religion, nationality, membership in a particular social group, or political opinion”, according to the United Nations 1951 Refugee Convention. Many refugees are in exile to escape the effects of natural or human-made disasters.

Asylum seekers :  Asylum seekers say they are refugees and have fled their homes as refugees do, but their claim to refugee status is not yet definitively evaluated in the country to which they fled.

Stateless Persons :  Stateless persons do not have a recognized nationality and do not belong to any country. Statelessness situations are usually caused by discrimination against certain groups. Their lack of identification — a citizenship certificate — can exclude them from access to important government services, including health care, education or employment.

Returnees :  Returnees are former refugees who return to their own countries or regions of origin after time in exile. Returnees need continuous support and reintegration assistance to ensure that they can rebuild their lives at home.