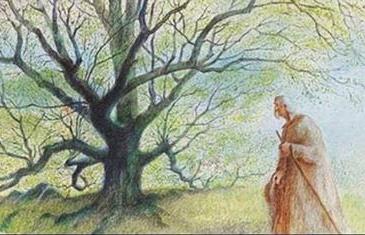 The coming and going of its roots, the missionary movement of our Canadian history

"Each of us is a unique. Each one has to become His/her name, the secret that he/she is, to reveal the form that takes Life in him/her. "J.Y.Lououp

The oak that the Good Father has described to us is the symbol of what God wanted to accomplish with him. It revealed to him the joyous mystery, whenever new people joined him with the same passion: to extend and strengthen the faith, to help all to find "Meaning", to help rebuild the human fabric of society and to help reunite the family around their God.

The dream of Fr.Noailles had no frontiers, his collaborators of that time and those of later, did not have them either. The same listening, the same fidelity guided the path that they had to follow. For our Founder, a life "centered" in God became like a fire that pushed forward, which set everything in motion. His charism, coming from the Heart of God, enabled him to have a great capacity to "gather" others for the same cause, the cause of Jesus. Pierre Bienvenu Noailles put his talents at the service of the Gospel. He lived with open eyes and an open heart and encouraged others to commit themselves to create a new social and spiritual life that is animated by a new breath of life.

Walk and let go our known securities. Once again let us think of Abraham. Our Founder lived such moments of letting go to the full. Let us think of the separation of the community in Paris and what he experienced with Fr. Malet and Mother Pertuzet. Then there is the work of the Poor priests and the departure of Fr. Charriez and Pierre.

Now let us re-live the memorable moments of our own history. There are no priorities in the choice of regions or topics addressed. During the first 50-60 years in Canada the apostolic commitments were rather homogeneous. The sisters committed themselves to care for the sick at home or in hospital and some other services to the poor, first of all we remember the three groups of founding sisters who came in 1901, 1902 and 1904. They came from France, Spain, England Ireland and Germany. Another 22 sisters and a few more came in the following years in order to spread Holy Family roots in Canadian soil. Most of them lived here until death and we have known several of them.

In the years 1958-1960, our 3 Belgian sisters arrived in Canada and they quickly committed themselves to our indigenous communities in the Lower North Coast.

Since 2014, 2 Polish sisters, 2 Congolese, 2 Sri Lankans, and 1 Indian have joined us to strengthen our presence with young people in a multicultural milieu.

So far we have considered the missionary movement towards Canada. There is also the movement towards the exterior. In 1929 Juliette Gonthier and Thérèse Déry left for Basutoland and South Africa.

In 1958 Cameroon hosted Canadian missionaries. They continued the human and spiritual promotion of the people of Cameroon-Chad.

From the years 1915 to 2008, many sisters have undertaken ministries in the field of education, health and administration in France, Belgium, England, Spain, and Italy.

The General House has counted several members in different General Councils, as well as in the services of animation and secretarial work.

May the blessing of the Lord be upon us forever!

Thanks to Good Father.

Thanks to all of us.