Preparing for Christmas with the JRS 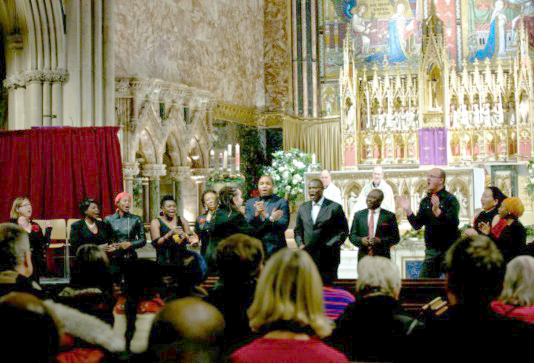 On Tuesday 19th December, the Jesuit Refugee Service (JRS), had a meeting in Farm Street for the people who are welcoming refugees into their communities, presbyteries or homes. Three Holy Family sisters were present. It was an opportunity to share our experiences, to ask questions and to receive updates on the work of JRS. It was a good experience to meet with other “Hosts”.

This was followed by a carol service at Farm Street Church. The church was packed for this very joyful occasion; many of the JRS’ refugee friends had travelled long distances to join the supporters and volunteers.

Highlights of the service were specially prepared contributions from two groups of refugees who attend the singing and drama groups at JRS Day Centre; these initiatives are designed to develop skills and confidence. The choir was trained by Soul Sanctuary Gospel Choir and the drama group by RISE Theatre (a professional Christian theatre company). They worked with the respective groups over a period of six weeks.

The drama group performed an original Nativity play called “Home”. The script, songs and poems that were part of this drama were created by the group. They described their own experiences and life stories through songs and drama. They spoke movingly of Home being “freedom”, “unconditional love”, “forgiveness” and also “where the journey begins”.

This group received financial support from the Holy Family Limited Trust. The choir of twelve performed three songs in beautiful harmony, including a Zulu hymn in which the audience participated. They were very enthusiastic and drew us all into their performance.

Fr Thomas H. Smolich SJ, International Director of JRS, gave the homily. He spoke movingly about the limitation of the statement: “yes, but…” stating that this was a phrase refugees heard often, and that most of us use all too regularly.

He invited the congregation to gaze upon the nativity scene and embrace the phrase “yes, and…” a phrase which sums up the unconditional love of Christ, and His welcome of all without exception.

This message is echoed in Pope Francis’ New Year message for the 2018 World Day of Peace in which he says: “In a spirit of compassion, let us embrace all those fleeing from war and hunger, or forced by discrimination, persecution, poverty and environmental degradation to leave their homelands”.

The service in Church was followed by snacks in the hall and the atmosphere was one of great joy. It was a truly special Christmas experience for our refugee friends. Then, on 21 December, there was a Christmas meal at the Centre in which over 200 hundred participated.