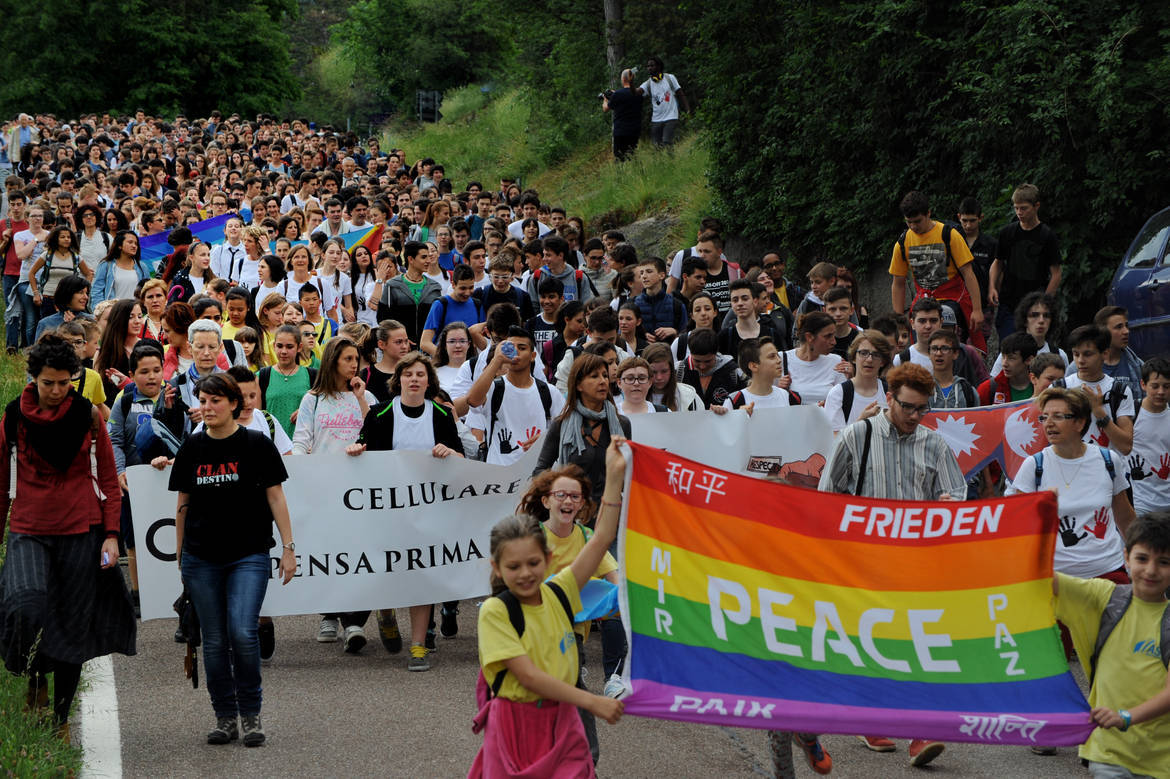 John Mpaliza was born in Bukavu, in the Democratic Republic of Congo. He is a software engineer.  He is forty five years of age and has been in Italy for the past twenty one years.

Until May 2014, he worked as a programmer in the municipality of Reggio Emilia, in the north of Italy.  He decided to leave his work for a much more important reason than personal fulfilment and earning a salary.  He set out to walk for peace, especially in the DR Congo, but also in the world.  He became the ‘Peace Walking Man’.

John is an energetic activist with very ambitious aims.  He knows that “walking for peace” will bring physical, psychological and moral suffering, not to mention the heat, cold, rain and snow.  It is very important for him to keep on walking even if he has no money or is tired because he has to reach his destination. As he goes along he meets people who like to hear his message of peace. He travels 35/45 km each day.

Why does he do it?

John wants to conscientise people about peace. He says, “I began to conscientise people about the traumatic situation of the Congolese people.  Their country is very rich but they are dying of poverty”.  Congo-Kinshasa is a country rich in fresh water, fertile land and biodiversity.   It is so rich in gold, cobalt, diamonds, tin, etc. that it could almost be called scandalous.

The lack of media interest in the DR Congo drove John to set out walking in order to conscientise the media, investors and politicians too.  After visiting the country in 2009, John exclaimed, “I was devastated by what I saw and heard and I decided I could no longer be silent.  I lost several relatives during the wars. Eight million Congolese died, about four million women suffered violence and nobody was doing anything about it. I did not want to be part of this death-dealing silence. Other African countries also have the same problems caused by the tyranny and exploitation of multinationals and industrialised countries, often in collusion with local leaders whom they have chosen and imposed on the people. I think that walking and speaking about the daily problems of these countries as well as of my own country helps people to see how unjustly they are treated and gives hope that Congo, and Africa in general, will experience a new dawn tomorrow”.

John walks quietly and joyfully.  He says, “I like to think that my way of bringing the message of peace to the people I meet on my journey shows them that, in spite of all the corruption, wars, famine and injustice which we experience every day, the world is not doomed.  I am convinced that the search for peace will lead to a socially just world”.

It is four years since John began to walk for peace in the DR Congo and in the whole world.  He keeps going by thinking of the thousands of people who are suffering in his own country and throughout the world.   His walking is the result of his own personal suffering, the suffering of a people and the lack of democracy.

Over the course of a month in 2016, John walked from Italy, (Reggio Emilia, where he lives) to Belgium (Brussels) to denounce the EU for the massacre in Beni (East Congo) especially and the alarming situation in the whole of the DR Congo in general.

From 1 to 29 October this year, John Mpaliza walked from Reggio Emilia (in the north of Italy) to Rome to let the world know that the situation in the DR Congo is getting worse. During the last week of this walk (23 – 29 October), he organised a lot of things to give information about Congo – conferences, sharing of experiences etc. – while still continuing to walk.  These activities were always open to all people of goodwill.

I took part in two of the events: First of all, the walk on Friday, 27 October when we walked from Piazza del Popolo to the entrance of St. Peter’s Square.  For security reasons and the safety of the group, we were accompanied by the Italian Police.  As we walked, we sang national songs in several of the languages of our country to express our sympathy for the people.  I was reminded of Psalm 136, “By the rivers of Babylon we sat down and wept when we remembered Sion”. We were accompanied by a guitar as we walked and sang.

On Sunday, the last day of the programme, I went with the group to St. Peter’s Square for the Angelus.   John wanted us to tell the world and the Church about the urgency of finding a rapid solution to the Congolese crisis by means of flags of the DR Congo and armbands on which were written “Peace – Pace”.

Dear sisters and brothers, please pray for the alarming situation in the DR Congo.  On 23 of this month at 17.30, in St. Peter’s Basilica, the Pope will pray for South Sudan and the DR Congo.