I was one of the privileged sisters who responded to an invitation to attend a Renewal session in Martillac in May. Seventeen participants were still in Formation and 5 renewed vows in Martillac. Some would make final vows on returning to their native country. We were encouraged to come (even though not in the formation category!) by the words of Pope Francis:

“By changing our way of looking at the world, we can look with gratitude at the road already covered, to begin to listen to what the Spirit is asking of us today, asking ourselves if Jesus is really our first and only love, so that we may embrace the future with hope”.

Along with Jean and Chandani, I attended all the sessions provided by Mary and her Team of able helpers: Genevieve, Adela and Jeevan.  Also we had talented help from Margaret Bradley who assisted all of us with her art and handicrafts to appreciate and deepen our understanding of the lectures given.

To see our Indian sisters do their traditional liturgical dance was really beautiful, and to hear our African sisters from the Congo, Cameroon, Rwanda, Lesotho and South Africa sing and play their drums was truly awe-inspiring. Every day we had Mass which was usually accompanied by beautiful singing from our Contemplative sisters. I was truly amazed at the purity of tone and rhythm which was flawless. Another ceremony saw the local Cardinal officiate.

In this multi-cultural setting, one came to appreciate the original Dream of the Founder who was inspired to begin the Holy Family Association. The image of the tree with birds of every colour, of every country each one with its own song, but singing as one voice, came to mind, while the presence of the beautiful countryside, the avenue he built with us in mind was being re-told to a new group of sisters today in Martillac.

Our contemporary lectures covered a whole range of topics which would be useful for all and merited revisiting by those of a different vintage, including work on Discernment, the Principles of the Universe, Exodus, Consecration for Mission and the Interior Life to name a few. Each lecture was followed by reflection  and  a quality  sharing  in  the  various language groups. Many reflected on their particular journey, sharing their difficulties in their work sphere and in their country where, due to politics, freedom of religion was not present, and where persecution in covert and overt forms was practised. Isolation of some young sisters, was mentioned seeing as one sister only was in formation.

During  our  time  we  visited Bordeaux, “walking in the footsteps of the Founder”; our booklet was a great help to us. For many this was their first experience of the places and churches associated with our Founder’s life. We had Mass from a very young French priest in St. Eulalie. Reminiscent of the Founder? We also went to Lourdes with a very early start in the morning. Everyone was delighted to visit the grotto, and the Basilica above, where there was again a multi-cultural celebration of Mass. Some first-timers went to the houses where Bernadette had lived, and witnessed first-hand her poverty.

The Mass on Pentecost Sunday was awe-inspiring. The “list” of different nations who heard the first sermon by St. Peter was replaced by a similar list of nationalities present in the Congregation, each one answering in her native tongue. Eighteen nationalities responded. Also, the singing of the Veni Creator was very nostalgic. 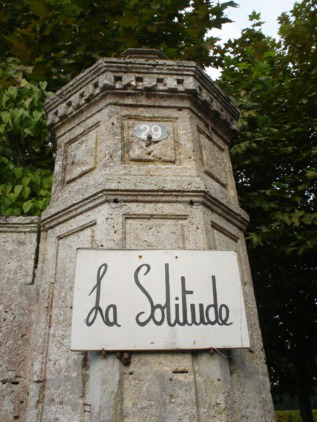 There is a wide outreach, of course, in Martillac to the many participants who come for direction and guidance in their journey, and many groups from the local parishes and diocese. We owe a lot to the Sisters who manage the premises so well. Visits to the Island were many, and we enjoyed our pilgrimages there immensely, remembering all in our communities before the Founder’s statue and in the Chapel to Our Lady of all Graces.

A family spirit prevailed and what impressed us most were the high tributes paid to our missionary sisters in the past who had helped and taught abroad in the various places. What a legacy they had left in these young women so willing to dedicate their lives to the same one who had inspired them to act. There was a cultural presentation of each one’s situation in her respective country.

This was documented, and apparently well presented! Another similar event but very different in content was our evening of cultural enter- tainment! A Pakistani sister performed her cultural dance for the second time on the Island the next day.

One of the highlights was a rare visit to our Contemplative community. We were well received. Srs. Melanie and Bernadette introduced all of the Community, and the participants did likewise. Sr. Teresa McElhone was in good form and chatted to all of us from our Province. They now have six  sisters  from  abroad, from Africa and Sri-Lanka. Some sisters are in formation.

The whole group was totally diverse but rich in their c u l t u r a l heritage; there was a strong sense of “belonging” to Holy Family, and a wish to deepen their values within the context of their commitment. There was much mutual enrichment in this place of internationality. It was interesting to observe how many future vocations are from the southern hemisphere whereas so few from Europe.