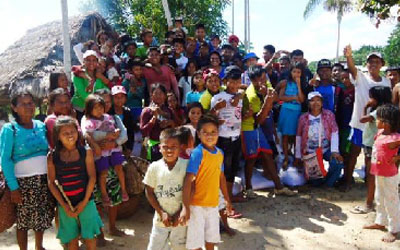 Sr. Luiza da Silva is a member of an inter-congregational community in Vendaval in Brazilian Amazonia. She speaks enthusiastically about the values of the Ticuna people, the ethnic group the Sisters work with.  The people are very poor and needy but they have plenty of what is most important – solidarity. The three Sisters who form the little community have been living in Vendaval since last July and are working to form leaders.

Luiza tells us about life in Vendaval:

Vendaval is an indigenous community which is part of the parish of Belém in the diocese of Solimões. There are 1890 people in the parish – all Ticuna. It is a lovely community with many children and young people. The people are very poor and live by fishing.  They grow some crops and they receive a government subsidy according to the number of children they have.  It is a shame that the government does not consider this ethnic group to be normal citizens.

Our work is to form catechists, community and liturgy leaders,  and arrange visits to the  24 small communities living on the banks of the river Solimões.  It is wonderful to see the interest and dedication of those who take on the responsibility of transmitting the Word of God.  They have been accompanied by a Religious for several years but he does not live with them.  They have been hoping for a long time that Religious would come and live in the community. 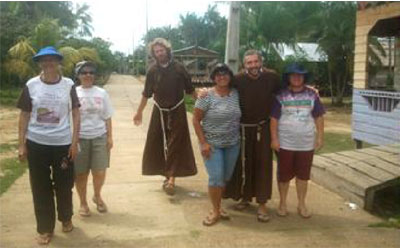 In December, the diocese decided to build a house for the Sisters.  The process of choosing the place was very interesting. Together with the Capuchins, who are responsible for the parish, we called an assembly where the Vendaval Pastoral Council was set up.

The place where the Sisters’ house would be built was put to a vote.  After an exchange of opinion, a group of women who live in the centre of the area made a very strong proposal that the place that was being voted on be adopted.  They also agreed to be responsible for the Sisters. They showed how seriously they took this promise when we told them the time the heavy building material would be arriving.  They were all waiting.  It was impressive to see the number of people – children, women, young and even old people – who went up and down the hill unloading the material.

We were very happy when Sr. Inés of the Conference of Religious of Brazil came to visit us.  She encouraged us and endorsed what we were doing.  It is very encouraging to know that we have the support of the people who know us and of the Conference of Religious. The visit was worthwhile.   It is lovely to live all this, and we thank God for the experience of being with the Ticuna people who are so welcoming and available. 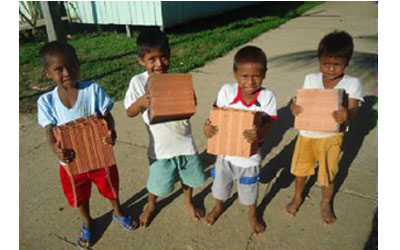