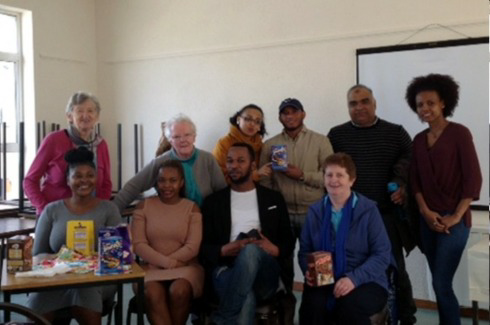 In October 2016, a group from Newbridge Parish Community, led by Holy Family Sister Eileen Murphy, began linking with Asylum seekers who live in the Eyre Powell Hotel, a Direct Provision Centre, in Newbridge. Over 70 people, including about 10 children, are accommodated there. They come from 15 countries on 4 continents, and widely different worlds, bringing with them their own;

They come from a variety of educational backgrounds and life experiences. Among them, there are:

One can only imagine the rich contribution they could make to Irish society. Adults in DP receive a weekly cash allowance of €21.60. They are not allowed to work - as already stated - or go to higher education. They are provided with three meals a day but are not allowed to cook their own meals, though changes in this regard are being introduced in some centres.

They share a room and keep all their belongings in one cupboard. They don’t know whether they will be there months or years. It began in October 2016 when residents were invited to a coffee morning in the Parish Centre. Since then, on the first Friday of every month a group of parishioners and asylum seekers meet for coffee and a chat in the Parish Centre.